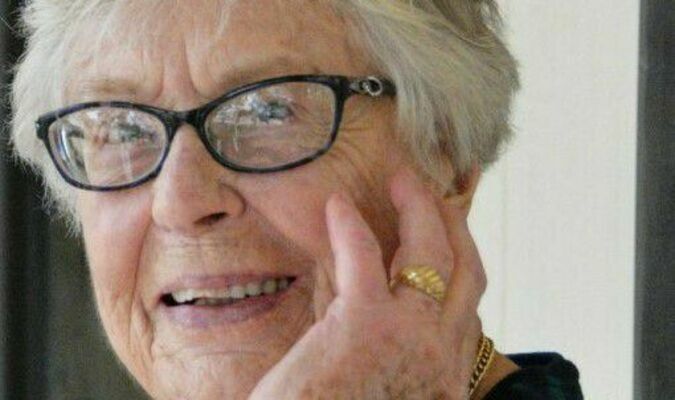 Margie Dee Marsh Wheat, age 99, of McGregor, passed away peacefully on Monday, January 24, 2022, at her home of 68 years in McGregor, surrounded by her daughters. Visitation will be held from 10 a.m. to 12 p.m., Saturday, January 29, 2022, at Cole Funeral Home Chapel in McGregor, Texas. A graveside service will follow at 1 p.m. at Moody Cemetery, Moody, Texas, with Rev. Jeff Huckeby officiating the celebration of her life.

Margie was born January 11, 1923, to Fred L. and Ida Marie (Kruse) Marsh, in Moody, Texas, on the family farm. She graduated from Moody High School in 1941 at age 17. Then later in 1941, Margie traveled by train to Missouri to become certified as a Western Union operator during WWII and beyond. Over the years, she was stationed in Greenville, Austin, Killeen and, eventually, Waco, where she and George Wheat finally met in 1953, when handling telegraph correspondence (early online dating). They married in 1954, raising two daughters. She was a stay-at-home mother until the children began school when she again entered the work force. She worked at Merrill Lynch, JC Penney’s and Sears.

Throughout the years, Margie enjoyed sewing and was an excellent seamstress. She was a member of the McGregor Garden Club, where she formed many lifelong friendships and enhanced her love of gardening. Margie found great satisfaction in serving at her church home of College Avenue Baptist Church, which she and George joined in the early 1960’s. In her later years, she enjoyed supporting Operation Christmas Child by sewing Barbie doll clothes for children. Margie loved her Savior and sharing her love of Jesus with family and friends.
Preceded in death by her parents; a sister, Edna Bea Alexander; brothers, Fred Marsh, Jr. and Charles Marsh, and husband, George, Margie is survived by daughters, Emily and Rodney Davidson, Cathy Anderson; grandchildren, Kevin and Aundrea Wright, Kyle and Kim Wright, Jessica and Brandon Johnson, Charlotte Anderson and fiancé, Brandon Geeslin, Wendy and Jake Donaldson; great-grandchildren, Matthew and Summer Wright, Chris Wright, Thomas and Amanda Wright, Ty Wright, Zack Carrillo, Anderson Carrillo, Ainsleigh Carrillo, Richard “Red” Donaldson, and numerous nieces, nephews, and cousins. lessed with many great neighbors over her 68 years on West 9th Street, her most recent neighbor blessings include Carol and Jeff Huckeby, Jane and Jim Strickler, and Julie Stultz.