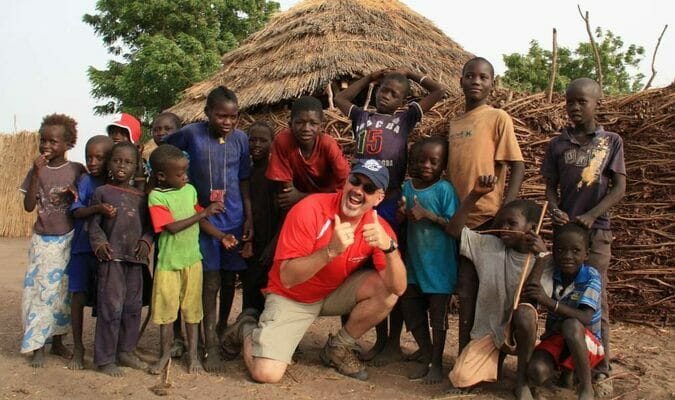 Lamothe worked for 3 years with Operation Christmas Child, Samaritan’s Purse Canada. As the International Regional Director, he was responsible for the coordination and delivery of over 300,000 Christmas Shoeboxes to seven countries in West and Central Africa. He knows first-hand the impact and power of a little shoebox, in not only how it can change the life of a child, but also of a family, a community - even an entire country!

Lamothe was previously a lead pastor/church planter in Ottawa, Ontario, Canada, for 13 years. He is also a veteran with the Canadian military, with 13 years of service. He recently moved to Waco in order for his wife, Donna, to attend Truett Seminary at Baylor University.

Lamothe is both a biker and wannabe cowboy at heart. Come hear real life stories of the impact of shoeboxes in Africa - stories that might even give you a new perspective about Christmas.

“We are blessed to have Lamothe and his wife living in our area and to be able to hear firsthand accounts of the impact a simple shoebox gift can have on a child and a nation,” said Debbie Quarles, Area Coordinator for the Heart of Texas Area.

Moody, Oglesby, Crawford, McGregor and other surrounding communities have been strong supporters of the Operation Christmas Child. In the past 5 years, area churches and individuals have packed and donated over 20,000 boxes to be sent around the world.

Rick Lamothe’s presentation is free and open to the public.

McNamara to speak at church on Nov. 6