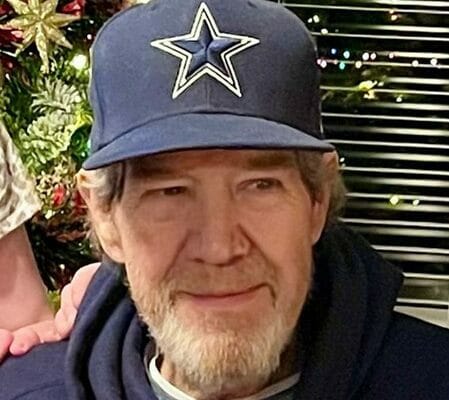 Roger Lee Glenn, 66, of McGregor, passed away on Tuesday, May 3, 2022. A visitation will be held from 5:30 p.m. to 7:30 p.m., Thursday, May 12, 2022, at Grace Gardens Funeral Home, Waco, TX. The funeral service will be held on Friday, May 13, 2022, at 3 p.m. in the Chapel at Grace Gardens Funeral Home with Pastor Curtis Jones officiating. A private family burial will be held on Saturday, May 14, at 2:30 p.m. at McGregor City Cemetery. Attendees are welcome to wear their favorite Dallas Cowboys apparel or colors.

Roger was born on September 26, 1955 in Whitney, Texas, the son of the late James William Glenn and Virgie Mary (Ely) Glenn. Growing up in Hillsboro, Roger graduated from Hillsboro High School in 1974.

In 1975, Roger met the love of his life, Cindy Schaffer, and they were married on October 8, 1976 in Hillsboro, Texas. Roger worked for Safeway in Hillsboro for over 20 years and Foster Wheeler in McGregor for over 20 years. Roger loved his family and was a loving husband, father, and grandfather. His hobbies were coaching various sports teams for his children and attending his children’s and grandchildren’s events. He was an avid fan of the Dallas Cowboys and the New York Yankees and loved Friday night football.

Preceding him in death were his brothers, William Riley Glenn and Jerry William Glenn.

The family would like to extend a special thank you to Hewitt Nursing and Rehabilitation for the special care given to Roger over the past month.

In lieu of flowers, the family requests donations to be made in Roger’s memory to St. Jude Children’s Research or the Humane Society of Central Texas.